3d Printed Infinity Base Marker Widget and More with Shapeways 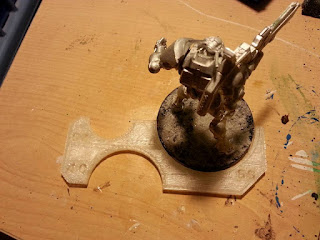 Marking the Front Arc of a base is crucial for Infinity, but is inaccurate to do using your eyeballs or a paper template. Thus, it was time for some quick engineering!

This tool was designed in TinkerCAD, which is a free website where you can create 3d models for 3d printers.The tool uses the 3 base sizes of Infinity; 25mm, 40mm, and 55 mm. I made one for Warmachine/Hordes base sizes too since I am a nice guy.  If you do not have access to a 3d printer, you can get objects printed on professional grade printers at Shapeways. I am looking over Shapeways' miniatures page looking for neat additions to enhance to my games, like 3d tokens for Mice and Mystics or the Starbago from Spaceballs for X-Wing.

There is a lot of potential for tabletop terrain on the miniature railroad page. as well. For instance, dumpsters for scatter terrain in Infinity. Coke machines or astromech droids as objective markers? Window vents to spruce up buildings, like my electrical box buildings? Every table needs a TARDIS, right? Ideas abound! 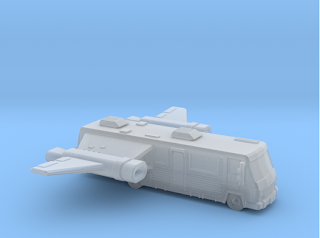 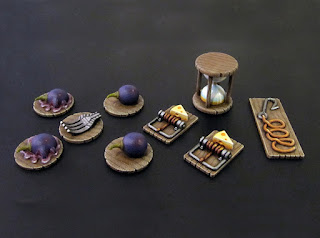 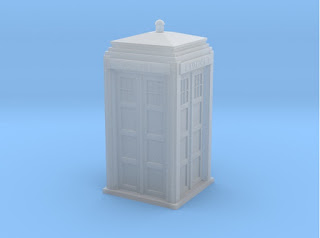 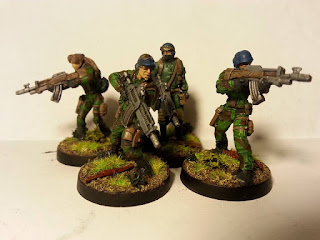 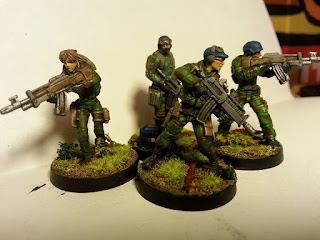 Sorry for the silence. My wife and I just had our first child, so that is a thing....Anywhooo, I painted these 4 figs for my Ariadna Infinity force. Nice to know that I can still find time to hobby with a baby.

Also, I am TOing my first Infinity event this weekend. A 150 pt Beginner's Bootcamp. The Kansas City area's first Infinity tournament. Woot!
Posted by Gigawatts at 8:42 AM 11 comments:

Email ThisBlogThis!Share to TwitterShare to FacebookShare to Pinterest
Labels: infinity 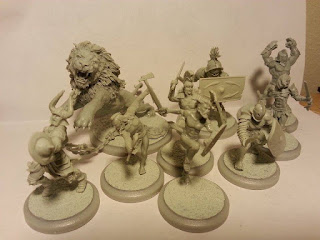 Finally, I assembled my Arena Rex since a friend just bought some models from their, now public, online store. http://arenarex.com/collections/all

The miniatures are beautiful. They are like miniature statues, as opposed to simply game pieces. Their detail goes above and beyond anything that I have handled before, be it Forge World, Malifaux, Infinity, or Warmachine. Also, the models were not as difficult to put together as I was dreading, with them being resin. 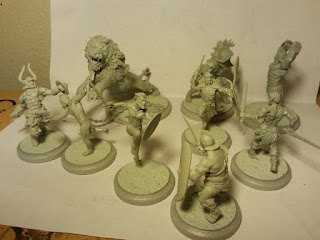 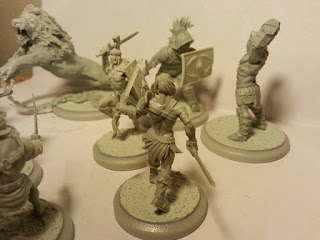 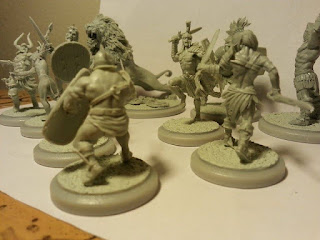 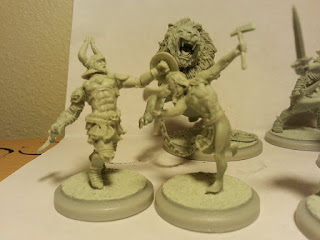 The minis were so much fun, that I felt the need to pose them into little action scenes. Too much fun, or perhaps too much exposure to super glue fumes (Untrue, since I was wearing a mask to protect from resin particles)/ 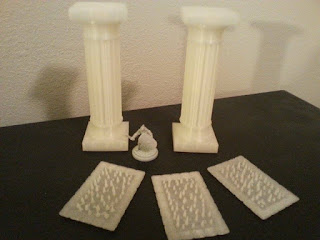 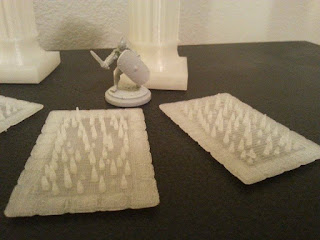 Miniatures of this quality deserve cool terrain to match its flavor. Thus, I 3d printed up some dangerous hazards and obstacles for the arena. https://www.tinkercad.com/things/3Jv9PeGTovP-gladiator-arena-2x3-spiked-pit-trap 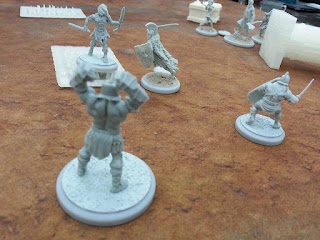 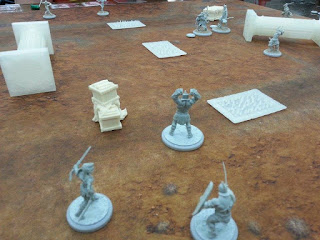 We played a 3-way battle with 3 gladiators each to test out the system. I was curious to try multiplayer since most miniature games fall apart in multiplayer. I am happy to say that the game was balanced and quite fun. It came down to a lone model surviving, and 2 gladiators met their untimely demise to the spiked pits. Definitely, want to try and get some more minis, after I paint up what I have.

I will go into more details on gameplay, if anyone is curious, but I was surprised how approachable/complex the rules were. I would say that it gave me the feel of something like X-Wing miniatures in that anyone off the street could play Arena Rex, but a newbie would have a hard time at beating a veteran player.
Posted by Gigawatts at 9:31 PM 9 comments: 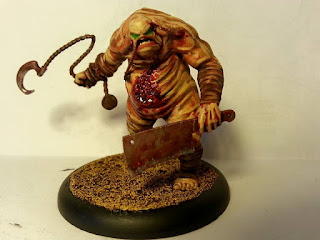 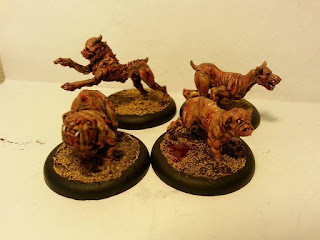 Had some fun painting up Killjoy and 4 Canine Remains for Malifaux. Blood effects were done with GW Technical Paint "Blood for the Blood God."

Email ThisBlogThis!Share to TwitterShare to FacebookShare to Pinterest
Labels: malifaux 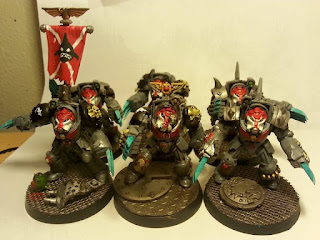 Shark Week inspired me to finish up some partially done Space Shark projects. I knocked out 2 Rhinos (which I minimally did since I do not enjoy vehicles), an Ironclad dreadnought, and the FW Carcharodon squad that I converted, the Red Brethern, which is a Lightning Claw troops choice, if taken with the named Carcharodon, Tyberos the Red Wake. 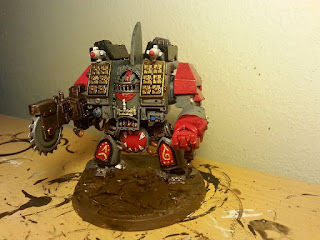 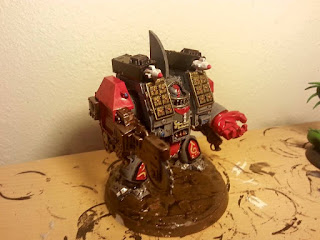 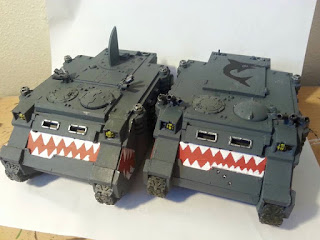 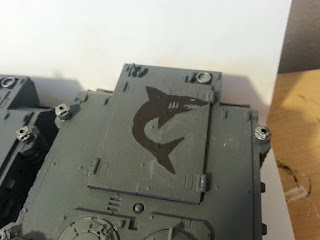 I admit that these are not going to win any Golden Demons, but I rather focus on making things look good in Malifaux, Infinity, or Warmahordes. 40k has too many similar sculpts and too many required models for me to keep my interest.
Posted by Gigawatts at 2:25 PM 4 comments: 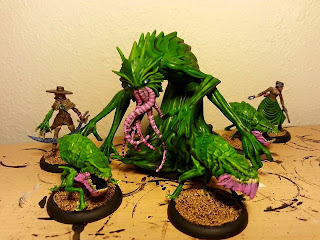 Woop! There it is! The Tara crew is done. Malifaux is just super duper fun to paint.

Here is how I did it the green beasties

1) Prime White, so I can see the details
2) Basecoat in Vallejo Olive Green and Bright Pink
3) GW Nuln Oil wash
4) GW Biel Tan Green wash (This step really brightened everything up and made it pop)
5) Go back and highlight a tad with the same base coat colors.

The bases are pumice that was painted with Vallejo Yellow Ochre and washed with GW Agrax Earthshade. I need to go and glue bits of vegetation to the bases.
Posted by Gigawatts at 8:25 AM 2 comments:

My W.I.P. Tara Crew aka the Fightn' Frog Brigade. 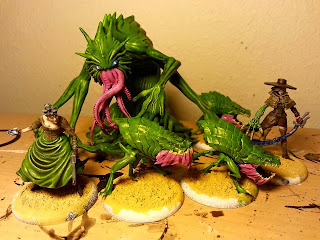 I waited a long time to paint my Tara crew because I couldn't find a scheme, so I decided to just paint them up like frogs. It's fun! 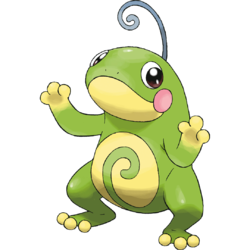